Wow!  The Burnham Wildlife Corridor (an environment established within Burnham Park’s 100 acre prairie and woodland ecosystem in Chicago) has now opened  Gathering Spaces.[1]  The urban park installation is 3+ mile trek (round trip) stretching from 47th St. to 31st St., along the lakefront and Lake Shore Drive. If you have driven down that stretch of Lake Shore Drive, you may have noticed the emergence of wild, native grass areas on the lake front side, and the light deforestation of the train side.  Well, those grassy patches have now matured into rolling fields of native Illinois grasses and flowers.  The rolling fields now have walking paths that take you away from the hustle and bustle of the city, and cushion against the noise of cars zipping along Lake Shore Drive.

The Gathering Spaces are in the midst of the rolling fields, each with a walking path that leads to it.  There are five in total, and I had a chance to visit four of them.  Each structure is built of natural materials, and designed to fit in with the environment, For the grand opening, there was a program at each space, with the artists’ speaking about their respective creation. 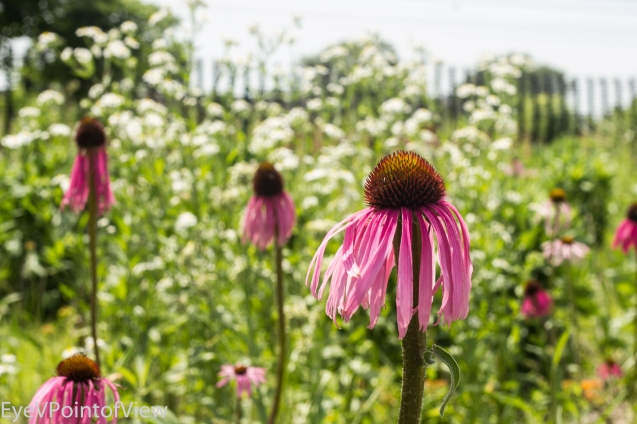 Last week, I wrote on the emergence of this new urban space.  Little did I know that I saw only the tip of the iceberg – there was so much more to this natural landscaping of the wildlife corridor than what I knew at the time.  As it is, I have only profiled four of the five Gathering Spaces, and I still have one more to find and photograph.  There is certainly more to explore in the Burnham Wildlife Corridor.  I hope you enjoy this glimpse of the gathering spaces provided by these 5* selections!

[1] This environment is a product of  “Roots and Routes” a collaborative project aimed at creating and sustaining the Burnham Wildlife Corridor  in order to maximize benefits for neighboring communities and nature.