“Blizzard warning in effect until 12 a.m. CST Monday. Heavy snow accumulation …. 10 to 16 inches…. With isolated higher amounts possible. Northeast winds will increase with 20 to 30 MPH with occasional gusts to 45 MPH.” That is the message from the Weather Channel on the snowstorm we are having in Chicago. And from the inside of my warm apartment, looking out over the blowing snow, with the sound of wind swirling around my building, going outside is NOT the thing to do.

But, outside, I did go. The story from the ground is very different. From that point of view, the snow covered trees lined the streets, park benches and tables covered with inches of snow, snow covered vehicles – 2 wheeled, and 4 wheeled – the snowy day is beautiful. I didn’t have to walk far (good thing, because it really WAS windy!), and I didn’t have my regular camera, but I had a good time trying out an alternative one. Not the full silence you have after a huge snow fall, but sounds dampened by snow… cars and other ground level objects blanketed by snow. I hope you enjoy these 5* selections from my short walk. 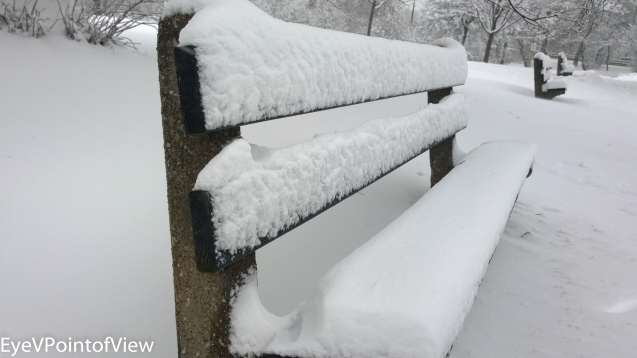 As I write this, the blizzard is still underway. And if you were out driving in it, or trying to fly in or out of Chicago, it probably wasn’t much fun. But, for me, walking around was just beautiful. Hope you enjoyed my point of view from this walk!